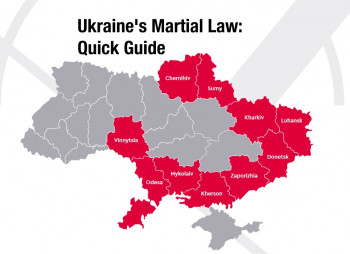 Sayenko Kharenko
Brief overview of what this means for your business, day-to-day operations, property and investment in Ukraine

On 26 November 2018, the President of Ukraine issued the decree (published on 28 November 2018 as supported by the Parliament) to introduce martial law in 10 regions of Ukraine for a 30-day period until 26 December 2018.

What Is Martial Law?

Martial law is a special legal regime imposed during periods of heightened military threat that gives state and military bodies additional powers and imposes restrictions on constitutional rights and freedoms for a certain period. Martial law has never been enacted in Ukraine before.

Therefore, there is no specific guidance at the moment on how it will be implemented in practice.
According to President Poroshenko, he would act under the martial law regime “only in the event of a land operation of the Russian regular army beyond occupied Crimea or the United Forces Operation area” (i.e. regions of military conflict in the Eastern Ukraine). The President said that "if we manage to avoid such scenario, the rights and freedoms of Ukrainian citizens will not be restricted". While this qualification is not clearly stated in the President's decree or in the Parliament's law approving the decree, it should be regarded as a political obligation undertaken by the head of state.

Several state authorities and organizations have made "keep calm" statements in connection with the situation:

Special regulations or restrictions may be imposed in the following areas/industries:

Certain categories of rights and freedoms may be restricted under martial law, including property rights, free entrepreneurship, free speech, labour and social rights, and free movement rights. As a  result, the state may be authorized to undertake the following measures:

Martial law generally provides that if a company fails to comply with martial law, the state may:

In this regard, companies and their owners should:

The martial law regime provides for the possibility of the forced sale of a company’s assets. In this regard, to prevent fraud/abuse the management shall be briefed of the respective asset forced sale requirements, including which state body may force such a sale, on what grounds, and how to properly document the transfer of assets.

Travelling into the territories covered by martial law could be a subject to specific restrictions. In such traveling arrangements, we recommend the travellers to carry personal identification and travel documents on them throughout the whole travel time and checking on any additional registration or other requirements imposed by local authorities prior to travelling. No such restrictions have been imposed yet. However, citizens of the Russian Federation are subject to increased scrutiny when crossing the border and are advised to carry additional paperwork properly documenting their business trip purpose or other reasons for travel.

As especially important for M&A, capital markets, debt financing and trade, introduction of martial law may invoke force majeure or material adverse change or a similar clause in business contracts. The business and its owners should review their contracts to understand if any notification/disclosure is needed in connection with the
introduction of martial law and make sure it does not trigger any adverse provision, which may require obtaining a waiver.

Tax system is generally unaffected by martial law. There are no new taxes or changes to the current tax rates.

Ukraine may extend its list of sanctions against Russia, its companies and nationals.

Foreign trade restrictions may be introduced by special legislation to accompany martial law (for example, import ban on certain Russian products). Furthermore, the duration of customs clearance procedure may be extended.

Access to the Internet should not be limited. However, martial law decree generally refers to the need of ensuring information and cyber security. Therefore, some ad hoc and targeted Internet restrictions, including access  to certain online resources, may be expected where it relates to national security and territorial integrity. Monitoring of communication traffic and temporary disconnection of selected networks is also possible.

Martial law authorizes the President to declare partial mobilization if necessary. Companies should check if their employees might be affected.  To ensure continuity of company's operations, it is advisable to develop a workforce restructuring plan in case some of its employees are mobilized.