TIU Canada is continuing to expand its renewables business in Ukraine

“This acquisition marks an important milestone in the development of TIU Canada’s renewable energy business and confirms our commitment to investment in Ukraine,” said Valentyna Beliakova, TIU Canada Country Director for Ukraine, according to a press release from the company.

The new projects in Odesa will be built by a local contractor called Rodina EG, which has already started engineering and design work for both projects, TIU Canada said.

The first one, a 10.5 megawatt solar power plant, is already operating near the city of Nikopol in Dnipropetrovsk Oblast. It started producing electricity in February 2018 and has the distinction of being the first investment made by a Canadian company under the Canada-Ukraine Free Trade Agreement (CUFTA), which entered into force in August 2017.

Another TIU Canada project – the Kalynivka solar station near Mykolaiv – is already under construction. It will cover 20.2 hectares and have a generating capacity of 13.5 megawatts.

Renewable projects, mainly solar and wind power plants, have sprouted rapidly in Ukraine since 2009, especially in the past few years due to Ukraine setting a one of the world’s highest green tariff – the rate paid for electricity generated from renewable sources.

However, the share of renewables in Ukraine’s electricity generation mix still remains very low – a modest 1.92 percent of the total produced electricity in the country, or 1,841 million kilowatts, as of Sept.1, 2018, according to the Ukrainian Renewable Energy Association. 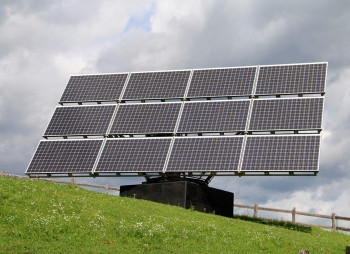