Founded out of San Francisco in 2005, OpenDNS provides a cross-platform online threat-protection service that Cisco says it will use to boost its own security, adding “broad visibility and threat intelligence from the OpenDNS cloud delivered platform.”

OpenDNS has raised north of $50 million in funding to date, including a $35 million round on May 2014.

While most security companies you’ll be familiar with require an individual or company to install software on a local piece of hardware, such as a computer, OpenDNS routes customers’ Internet connections through its own servers and blocks malicious activity at its end. It’s basically a cloud-based security service that’s easy to deploy at scale, and its high profile is indicative of the increased need for security with the burgeoning Internet of Things expected to see 50 billion devices connect to the Internet by 2020.

The deal is expected to close in the first quarter of 2016, when the OpenDNS team will join the Cisco Security Business Group. David Ulevitch, founder and CEO of OpenDNS, said, “We’re not going anywhere and OpenDNS as you know it will continue to work as it does today.”

Cisco says it will pay $635 million in “cash and assumed equity awards, plus retention based incentives for OpenDNS.” 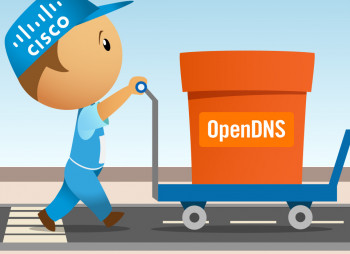