Monsanto Co. and Deere & Co. struck a deal to strengthen their cooperation in the emerging business of big-data services that help farmers improve crop performance.

The deal “benefits all our customers and will allow for more information and better data-driven insights to come out of Climate,” Mike Stern, president of the division at Monsanto, said Tuesday.

Monsanto and Deere, along with other agribusiness giants like DuPont Co. and Cargill Inc., are investing heavily in sensor technology, data-analysis systems and wireless transmitters to drive a technology revolution on U.S. farms that they hope will become big new revenue streams. The companies are selling services that harness data-crunching techniques honed in Silicon Valley to help farmers boost crop yields and use equipment, seeds, and fertilizer more efficiently.

For Monsanto, which has spent more than $1 billion to build out its suite of computerized farming services, the deal announced Tuesday enables easier access to data collected by Moline, Ill.-based Deere’s vast number of green-and-yellow tractors and combines. Deere controls about two-thirds of the U.S. market for high-horsepower farm tractors, and under the deal, Monsanto’s Climate division will become the first outside company with which Deere allows its equipment to share data in what the companies called “near real-time.” The arrangement is exclusive for multiple years, according to Monsanto.

Farmers will decide whether or not they want their Deere equipment to stream data to the Climate system. Both companies maintain that the farmers using their systems own the data related to their own fields, though the companies can use some information to develop services.

The deal is Deere’s third in less than a month to expand its own lineup of technology-based farming gear and services, after agreeing to buy a French planter company and forming a joint venture around farm management software. Falling sales of Deere’s big-ticket machinery in a weakening North American farm economy is causing the company to turn its attention to  services and niche product lines that offer farmers lower costs and greater efficiency.

Mr. Stern said getting out of the business of making and selling Precision Planting’s high-tech planters focuses Monsanto’s Climate division more on its data-science services, a business Monsanto has estimated will deliver several hundred million dollars in annual revenue by 2019. 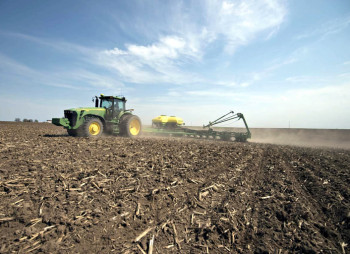