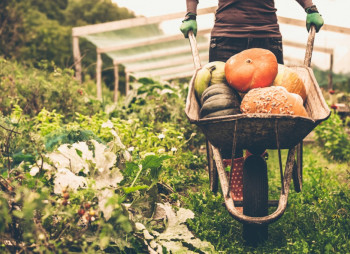 On December 20, the Ministry of Agrarian Policy and Food of Ukraine held a regular meeting of the working group on the development of organic production

Among the already traditional topics of improving the legislative framework in the field of organic farming, the gathering of Ministry of Agrarian Policy and Food of Ukraine directed a special attention to new ways of stimulating sales and creating opportunities for domestic companies in promotion of the Ukrainian products in the foreign markets.

The major world organic industry event BioFach 2018 will take place in two months period. The National Pavilion of Ukraine will be represented for the fifth time there. Over the past four years, the area of ​​the Ukrainian pavilion has almost doubled from 70 square meters to 130 sq. m. in 2018. The number of exhibitor companies will also increase from 8 to 18, respectively.

Suchlike growth rates are due to the real opportunities provided by international events hosting Ukrainian producers. According to the line ministry, 14 Ukrainian exhibitors held more than 500 business meetings with potential buyers during four days of the exhibition in 2016, for example. As a result, contracts worth EUR 3.5mln were signed with foreign vendors. The number of participants from Ukraine accounted to some 5% of the total number of the producers that could use such marketing opportunities in fact.

According to the Ministry of Agrarian Policy and Food of Ukraine, organic farming grasps 362 281 hectares of land over Ukraine, and the number of certified organic producers makes 305, as of present. If to compare with 2011, those numbers grew by 34% and 96%, respectively. But do the exports increase at similar rates?

"Of course, the dynamics of exports of organic products from Ukraine seem growing, but the importers mostly point out that the same companies from Ukraine do the exports. New companies have been lagging behind for the past two years. Small organic producers are of concern in this respect. Their capacity for making sales is a sensitive issue, as of today because demand for their certified products has not yet been adequately formed in the domestic market. On this wise, exporting remains a priority for them”, said Maria Makhnovets, an expert in organic exports and trade relations, co-founder of the Agroportex project.

There are several major factors that create difficulties for organic producers in entering new markets.

The organic farmers very often speak foreign languages badly or don’ts speak them at all. It significantly hampers local farmers to negotiating deals. The communication process and building of relationships between the buyer and seller up are one of the most problematic issues. The initial encounter and the first talks can mislead and form a negative impression on the buyer’s side. Working with the Ukrainian market, the foreign partners lack information to try reliability of some potential suppliers. Same concerns are about screening indicators for measuring possible risks.

In succession of the topic on making new opportunities for Ukrainian producers, a presentation of B2B Marketplace Primary market of organic products of Ukraine was given to tackle the issue. According to the founders of the AgroportEx project, both buyers and sellers require guarantees. The primary market itself is able to carry guarantee for buyers on the prices from producers avoiding intermediaries. On the other hand, it also offers an opportunity to evaluate partners upon deliveries and influence reputation in this way directly.

AgroportEx is an alternative to traditional Ukrainian computer bulletin board systems and foreign specialized online marketplaces. The first do not provide buyers an opportunity to track the value chains of organic products and the reliability of sellers, while the latter are not adapted to the mental and infrastructural realities of the Ukrainian market (working on commission basis motivate establishing  relations directly).

"We need to form not some sort of the rumors market, but an open market with reputational history of all the participants. What do customers need? They need certain amount of a product at the lowest price provided by a trusted producer. Do producers want to reduce prices? Of course not. That’s why there is a call for establishing a Primary Market providing direct access to producers without intermediaries with transparent rules set out”, told Dmitry Titarenko, project manager and general manager of AGROPORT Ukraine.  “Agroportex is Uber, but for agricultural producers. As car drivers are obliged to have a driver’s license, the organic farmers have to obtain a certificate with the specified organic products for planting and making sales. In the meantime, a transparent system for business reputation index allows new players to join the market on equal footings provided tracking of their supply chains. The market demands transparent rules and it is ready for innovative solutions,” Titarenko summed up.

Ukrainian agricultural producers do not sit in offices mainly and their agricultural assets are located outside the cities. Most of their time, they spend not at computers, neither at e-mails nor social networks. However, the major communication tool that is always with them is the phone. A phone is a source of the most recent information about goods, prices and inventories in stock. In this respect, an application for mobile devices will become available for Android and iOS in the first quarter of 2018. Training master classes and the project presentations have already been scheduled for all the events of AGROPORT Ukraine 2018.

Ending a 5-year development strategy Localization of agribusiness - focus on regions, AGROPORT conferences will continue to be hosted in three major cities of Ukraine and cover the interests of Western, Southern and Eastern agricultural producers in particular, including the representatives of the food industry.

Kherson has been chosen as a new region to unite the interests of the South of Ukraine. It is not by chance. After all, Kherson is one of the leaders in the value added chains of agricultural Ukraine. To note, Climate-Frendly Farming will also become a part of the program in the frames of the business development program of the forum taking heed of the climate change influencing farming.

AGROPORT is a large-scale annual event aimed at supporting farmers and agricultural companies in Ukraine and Eastern Europe. It has been conducted since 2015 with the support of the FAO and is included in the UN calendar of events. Traditionally the theme of the event correlates with the general line of the FAO and supports the themes of the International Years that the General Assembly of the United Nations follows. Since 2016, AGROPORT has united farmers throughout Ukraine and is held in the West-East format. The forum is comprehensive and consists of an exhibition of machinery and technologies for farming, an investment conference and a series of seminars, roundtables and business meetings. Since its foundation, the location of the venues is usually at the premises of the international airports in Kharkiv and Lviv. The organizer of the forum is a consulting company AviaBrand LLC.

AgroportEx is an agricultural Marketplace that guarantees access for buyers from all over the world to the primary market of organic products of Ukraine (400+ producers, 1000+ items, 2000+ potential offers from producers). The first release of the mobile application is scheduled for the first quarter of 2018 and will be available for users of Android and iOS platforms. The total amount of investment in the start-up is about USD 300K, of which USD 130K the team plans to attract from outside investors.

Biofach is a leading world exhibition which has been gathering organic producers from all over the world for the last 29 years. The first event gathered 197 participants and 2500 visitors in Ludwigshafen in 1990. Now, Biofach takes place in Nuremberg in Germany. Biofach 2018 will be conducted from 14 to 17 February in Nuremberg, Germany.