AdTena recently obtained $60K from venture investors in exchange for equity. The investment was obtained from members of the business angels community UAngel and involved the Wannabiz incubator, Detonate Ventures, and Zorea Venture.

In a bid to monetize on WiFi networks, Ukrainian startup AdTena has created a service which combines the functions of AdWords and AdSense. The concept is original in that it uses geolocation in targeting hotspots, as opposed to contextual targeting on websites.

Thus far, AdTena has spread to about 100 WiFi platforms, offering 20000 daily impressions, reported Ukrainian tech blog AIN. The startup already has its first clients, but declines to reveal their identities.

For one of the customers, displaying 10000 banners led to 1300 transfers to the site and 75 email addresses were left. Therefore, the customer obtained a 13% CTR by using the service.

The startup is operating through partnerships with WiFi networks and plans to combine the maximum number in the service, whether they are independent businesses or networks.

The creators of the project are Alexander Dzyuba and Alexander Trush, who initially explored the idea behind it in October 2014 and then, in November 2014, applied to the WannaBiz incubator. 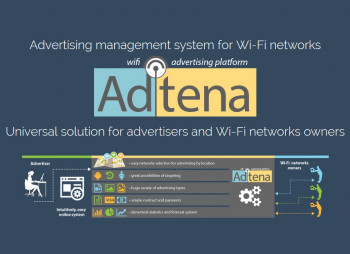