Despite the fact that venture capital mainly associates with investments in advanced technology spheres, nowadays noted venture capitalists observe the promising perspectives in one of the oldest industries – agriculture.

The driving force of investment in agrotechnologies is the global increasing demand on foodstuff, which is stimulated by the population upsurge (according to the expert evaluation the world`s population reach 10 bln people till 2050). Apart from the population growth, the prosperity of a lot of countries, such as India and China, has also experienced the improvement; citizens start to consume more protein products, namely meat. According to the USDA data, it is expected that meat consumption per head is going to increase from 79 pounds in 1999 to 99 pounds in 2030. All of this, gives the reason for re-comprehension of how effective the agriculture operates today and if it will be able to provide enough food, to support the global population, without causing a substantial harm to the planet.

Nowadays, investors from the Silicon Valley begin reviewing the investments in different niches of so called «AgTech»: starting with big data and proceeding up to the drones. Venture capitalists estimate agrotechnologies as a multitrillion market, which has grown into more effective and ecological decisions in agriculture on all of the levels.

In 2013, U.S. venture capitalists invested $55 million in the "ag tech" sector, and this year, investments have spiked more than 170 percent to about $153 million. 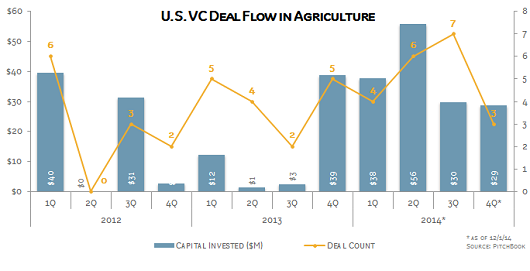 *According to the EVCA / PEREP Analytics

AgTech had a breakout year in 2014 in terms of deal volume and investment totals. Our analysis of AgTech’s $2.36B in financing over 264 deals in 2014 shows that AgTech received more financing than seven of the 19 sectors tracked by MatterMark and is on par with venture funding for security companies ($2.3B), and ahead of cleantech ($2.0B) and fintech ($2.2B). 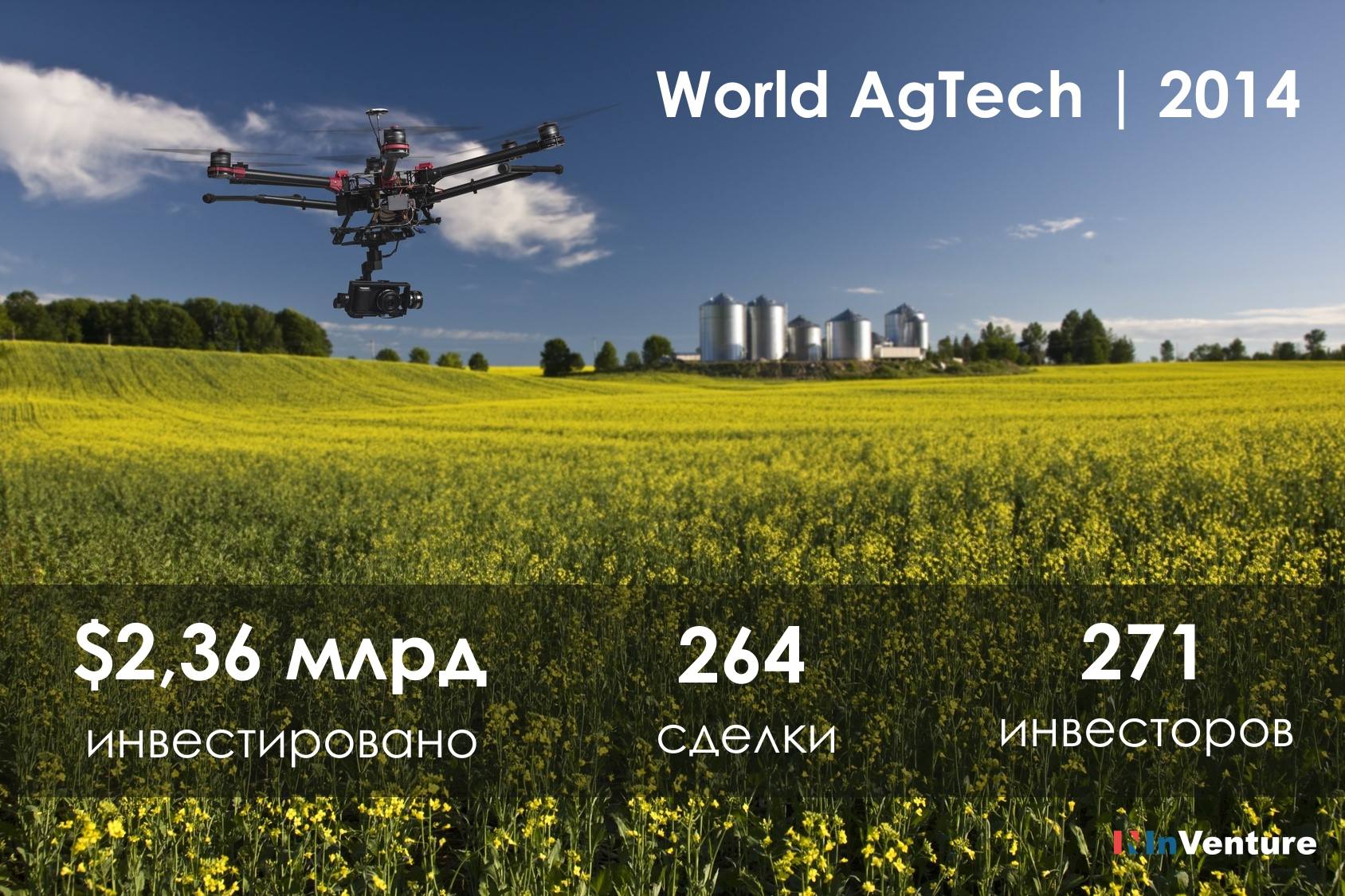 Precision agriculture is broadly defined as the group of hardware and software technologies that help farmers improve decision-making with data-driven analytics. Companies can be analytics providers or provide supporting technologies, such as drone platforms that have identified agriculture as a key vertical. Precision ag represented 30% of AgTech deals in 2014, but received only 12% of investment capital. Most investment centered on early stage opportunities: 83% of the deals were Seed or Series A, with median deal size of $1.15M. FarmLink ($40M) and Airware ($25M) stood out at later stage companies that received significant financing.
At the other end of the agriculture value chain spectrum, foodtech companies saw $679M in financing over 59 deals. Dominating this group was grocery delivery service Instacart ($260M), and Hampton Creek ($113M), which is aiming to
disrupt the poultry industry with a plant-based egg. Together, these two companies represented over 50% of the total foodtech financing. Overall, sustainable protein also attracted some of most elite firms in Silicon Valley, as these companies disrupt the meat and egg industry, which traditionally demands many resources to maintain and has a huge environmental impact. It appears these investors are challenging the idea that venture capital isn’t out to solve big problems.
Indoor Agriculture also had a breakout year, receiving seven percent of invested dollars in 2014. Long considered unviable
due to high energy costs, the emergence of Indoor Agriculture is being driven by the local food movement and water conservation initiatives, affordable LEDs, and a nascent cannabis industry. The largest deals in 2014 were London-headquartered SunDrop Farms, which raised $100M from KKR, and New Jersey Based Aerofarms which raised $36M.
Given deregulation trends (and Snoop Dogg’s recent announcement of a $25M fund for weed startups) no AgTech report would be complete without a summary of technology geared towards the cannabis industry. While not all cannabis startups fall within the scope of AgTech, twelve weedtech (and hemp) companies captured nearly $23M in total funding for 2014, with a median deal size of $1.16M. The largest financing went to GrowLife ($12.1M), which produces cultivation technology for growers and trades on the OTC under the symbol PHOT. Of notable mention, Eaze gave new meaning to the term ‘getting high’ after it raised $1.5M for its marijuana drone delivery service. In this case, we know what those investors were smoking.
2. Investment deals in AgTech – a signal for venture industry

A convincing reason for venture investors to focus on the certain niche, is the existence of successful deals of their technological companies` launching, by means of selling it to the strategic investors, IPO, or participation of other venture players in the new round of investment.

One of the most significant deals, which sparked the interest of venture investors in agricultural sphere, was the acquisition of The Climate Corp, climatic data collection and processing company, by the leading global technology solutions supplier in the agrosphere Monsanto, for $1.1 bln. The company represents a security service for farmers, which on basis of special instruments and data analytics estimates risks connected to the weather conditions. It worth noticing that The Climate Corp is a successful withdrawal from the project of Google Ventures and Khosla Ventures funds, which invested $42 mln in WeatherBill startup in 2011.

But Google Ventures hadn`t stopped, and in 2015 in cooperation with two more venture funds DBL Investors и Kleiner Perkins Caufield & Byers invested $15 mln on the B round in the Farmers Business Network startup. This service gives farmers an opportunity to make more reasonable and well-considered decisions against corn growing, using the data about the weather and grounds, which were collected with the help of sensing agriculture device. On basis of the data, the company gives recommendations to farmers of how to use the needed resources: seeds, fertilizers and chemicals. It is important to note the Google Ventures became the lead investor in Farmers Business Network, earlier in 2014 on the A round Kleiner Perkins Caufield & Byers invested $5,6 mln and DBL Investors invested $3,3 mln in the project.

At the end of 2014 one more agro-startup FarmLogs raised $10 mln on the round B, from the venture funds that had already invested a sum, such as Drive Capital, Huron River Ventures, Hyde Park Venture Partners, and new ones - SV Angels и Sam Altman – the president of Y Combinator. This start-up exists since 2012, when it passed the acceleration support in Y Combinator incubator. Nowadays almost 15% of all farmers` households, used for plant cultivation, are subscribed for FarmLogs cloud software. The platform allows farmers to get access by using the smartphones to the information about their farms and monitor the conditions of agricultural lands, and make decisions of which lands need to be ploughed, planted, watered or where they should secure the crop. The service also monitors the hourly weather conditions, prices on the raw materials and provides diagrams on the mechanical services for agricultural machinery. Currently, in the cloud solutions of FarmLogs there is a crop volume worth of $12 bln.

From the recent deals can be distinguished Estonian VitalFields start up, which has attracted $1,2 mln on the round A, from such investors, as как SmartCap, Estonian Development Fund and one of the Sillicon Valley`s venture fund. VitalFields represents revolution solutions for farms managing, by using simple and affordable online-services. The software program includes following functionality:  annual budgeting, fields management, accurate weather forecast, prognosis of plant diseases, warehouse management, financial data reporting and resource planning.

Top 5 investment transactions in the major segments of AgTech 2014

3. Which opportunities has Ukraine for participation in venture race after agritechnologies?

The sufficient contribution of two national industries – IT and agrisector in the formation of export potential of the country, forces to pay attention to the relevance of necessity to implement IT technologies in agrarian corporations and farms with the purpose of Ukrainian AIC`s increase of effectiveness.

Ukrainian agrarians and IT-companies have a unique chance to create a brand of Ukraine, as a supplier of not only high quality agriproduct with a high efficiency of production, but also of groundbreaking IT-solutions and products for the global agrarian sector.

In spite of a great number of contributing factors of Ukrainian startups development in AgTech sphere, there are also a lot of serious hindrances.

Firstly, in Ukraine, due to the low level of entrepreneurship development, there is a small number of highly qualified entrepreneurs in agriculture sphere, who are ready to develop new technological products.

Secondly, because of the poor development of infrastructure of Ukrainian venture market, and particularly limited number of venture funds, incubators, and professional business angels, there is no need to expect the financial and mentor support from venture players.

Thirdly, for entrepreneurs to have the interest for agritechnologies development and for venture players to risk their investments, there should be prerequisites for withdrawing from the project. A good deal hangs on the maturing of Ukrainian agroholdings, in a part of readiness for merges and acquisitions of technological companies; currently, unfortunately, the priority of majority of Ukrainian latifundists is extension of the land bank.

The main task in the development of Ukrainian AgTech includes the necessity of cooperation of programmers, representatives of IT industry and agrosector with attraction of the talented youth, which has an entrepreneurial spirit.

The first step in this direction can be the carrying of Agro IT-Booster hackathon – the three-day hackathon for production of technological solutions in the agrarian sphere. The event will take place in Ternopol, September 18-20th. This is a unique event for IT-specialists and agribusiness representatives. The participants of the marathon will create new IT-products and solve the urgent problems in different fields of agricultural industry -  plant cultivation, cattle breeding, raw materials and waste processing.

Developers will be able to try their hands in underexplored, but very essential niche for Ukraine – IT-solutions for agrarian business. Mobile apps, Big Data, behavioural researches, even gamification – all you could have ever imagined in the framework of your mechanical skills. Agro IT-Booster hackathon – it is a chance not only to create a valuable product, but also to instantly find a clients or investors for it, in the face of agrosector representatives. Apart from that, the winner-team will get 20 000 UAH for the implementation of their idea and product development.

Representatives of Ukrainian agribusiness will obtain the real instruments for solvation of daily problems, connected with data storage and retrieval, logistics, information analysis and processing. Business will be able to become a generator of innovational change in agrarian industry, with the help of effective and inexpensive point solutions instead of massive complex program product. 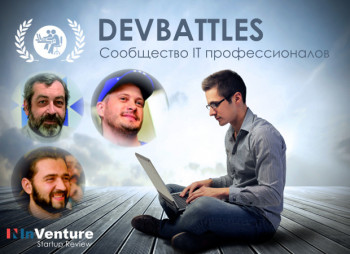 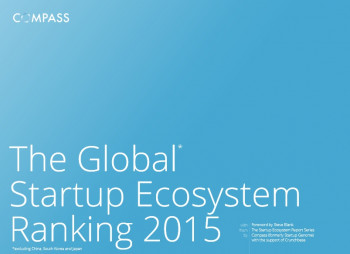 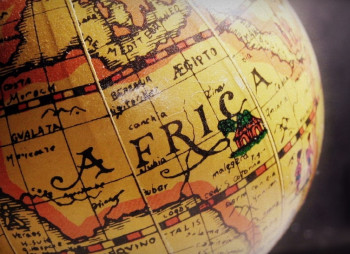