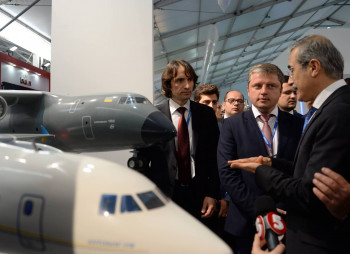 Antonov State Enterprise (Kyiv) and Turkish Aerospace Industry (TAI) are preparing for development of cooperation for creating an average transport aircraft for a short take-off and landing, ...

According to the press service of the state concern, during the talks hold at the international aerospace salon Farnborough 2018 (Britain), the Ukrainian and Turkish sides confirmed mutual interest in cooperation on the An-188 project and outlined plans for joint promotion of the program.

According to the agreement, in the near future the TAI delegation intends to visit Antonov State Enterprise for a detailed study of the feasibility of establishing a joint venture for the An-188 project and preparing the appropriate regulatory framework for cooperation.

According to data earlier provided by Antonov, the new medium transport An-188 is a modification of a military transport An-70 aircraft with a carrying capacity of 47 tonnes.

The plans to organize cooperation on the An-188 program with the Turkish aviation industry were announced by Ukroboronprom after participating in the Eurasia 2018 aerospace show in Antalya in April.